Synchronicities of the Apocalypse; the Insider and the Elder 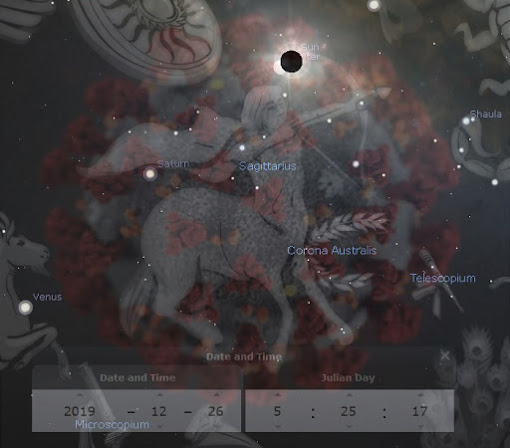 Back in September of 2021 I featured an article posted by The Big The One regarding leaked information from an insider about the real reason for COVID and the vaccine. The insider basically stated that COVID and the vaccine were for the purpose of killing billions of people and collapsing the governments of the world and thus paving the way for the takeover of the world by a new world government—the new world order. Here is what he said.

You could say that the plan is in full swing and very successful so far. The absorption of mRNA has been huge, and everyone believes that "cure" is the only way to get back to normal. These guys told me that the implementation of the plan exceeded their wildest expectations!

Then the tabloids will make a U-turn and start telling the pure truth about these vaccines. Millions, if not billions, will die. People will become enraged and burn their governments to the ground. Politicians, bureaucrats, and illustrious doctors will be hanged on lanterns. Provaxes, feeling doomed, will be furious. Anti-Vaxx will be furious. because their government allowed this nightmare. And when the world chaos and the war of all against all begins, a new world government will emerge and become a great savior. I was told it would be an "easy sale."

That is some very interesting insider information, but is it true? As most of you are aware Seal 1 is a force going throughout the world to conquer it. And as most of you are aware I have been telling you Seal one may have already been opened and COVID and the vaccine may be the agent in which they will conquer the world. See the post;

Is what the insider is telling us about the workings of the white horse of Seal 1? And if so, then we can indeed conclude that Seal 1 been opened and billions will die from these shots in the near future. Let’s consider what Seal 4 entails.

And when he had opened the fourth seal, I heard the voice of the fourth beast say, Come and see.

And I looked, and behold a pale horse: and his name that sat on him was Death, and Hell followed with him. And power was given unto them over the fourth part of the earth, to kill with sword, and with hunger, and with death, and with the beasts of the earth. Rev 6:7,8

One out of four one the earth dying would be approximately 1.9 billion people. And if billions do die, will the masses turn on their governments and topple them, just as the insider has told us? Consider another piece of data featured at The Big The One about a message from the Greek elder Geoken.

My children will be arresting a leader of a very large country!!! Maybe he won't have time to go to Court, what will happen(the arrest) will be so sudden that as a consequence, the foundations of all governments will creak, it will be very big.

This conception will be the beginning of the end for many until everything is clear, the Lord will let them eat each other, this blessed hour is coming, they will eat their flesh, they will accuse each other of corruption and much more, in the beginning the world will be in a mess, people won't understand what's happening to them

People will be bemused, they will think it is some farce, but after that there will be confusion in many, governments will fall and others will come out to replace those that have fallen, they will also fall immediately.

All over the world, one government will accuse the other of fake news, and the other will accuse the former of getting it involved, all this will be done with LIGHTNING-BLAST MOVEMENTS... the world will be so confused and bewildered that seeing even on the street a person, they will think lest he be like the others.

You will see governments that fall on top of each other, you will see governments and rulers who leave their countries aron-aron, and will be blamed by those who are to be accused themselves, by their collaborators, but in the end they will go through terrible halls, all together and everyone will take what belongs to them, for the great evil they started and did to humanity.

Well, that is quite an interesting sync, the insider featured at the beginning says the governments of the world will collapse because people will turn on their governments for their crimes against humanity and the Elder Geoken says the same thing.

Again, that is quite an interesting sync and if what they are saying is true, then the implications lead to the conclusion that we are indeed in the last 7 years, Seal one has been opened, Seal 4 can be seen on the horizon, and Seals 2 and 3 are imminent.

And if the information is valid who do you think will be the leader of a very large country that will be arrested? Biden, Hillary, Obama, Trump, Johnson, the Queen?

Regardless of who the first is to be arrested, after the world is in disarray from the first 4 Seals, which were brought about by the actions of evil forces aligned with satan, the world will beg for a savior—aka the UFO connected antichrist. As the insider put it, “And when the world chaos and the war of all against all begins, a new world government will emerge and become a great savior. I was told it would be an "easy sale."”

Please do not continue to think that the rapture will rescue you from these things. Christians will be here until after Seal 6 is opened, that is when the rapture occurs. Have you prepared for the end times? 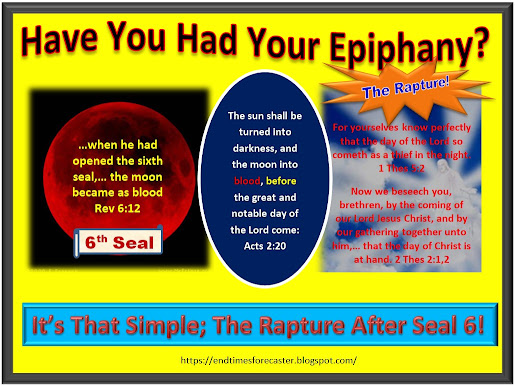 Have you had your epiphany? You need to be prepared for the end times! Read The Coming Epiphany;—Your Guide to Understanding End Times Bible Prophecy.