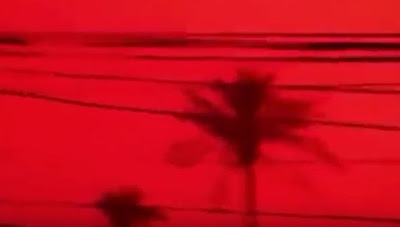 Does God give signs when big events are pending? Yes, He often does. Throughout the centuries God has given many signs. For example there have been many celestial signs in the heavens, with Moses when his staff turned into a snake, when the fiery tongues landed upon the disciples, with the fleece and the dew, etc.

So God has given many signs throughout the ages and He may have just given us another one—a blood red sky in Basra, Iraq. Take a look at what occurred in Basra, Iraq on 2/18/2018.


So how is this a possible sign from God, you ask. Because WW3 is supposed to start out of an incident that occurs in Basra, Iraq.

Another illuminati writer, H.G. Wells, has further detailed that WWIII will start from an event that occurs in Basra. He was given this information from a demonic Guiding Spirit in 1933 in which he wrote about in his book entitled, "The Shape of Things To Come."

"…the plan for the 'Modern World-State' (New World Order) would succeed in its third attempt (WWIII) and would come out of something that would occur in Basra, Iraq." The Coming Epiphany; Chapter 9

What the Basra, Iraq event is supposed to be, I do not know. I guess there are many possible events that could fit the bill.
So again I ask the question; is this blood red sky in Basra, Iraq a sign from God that WW3 is imminent or is it just a coincidence?

The end times are knocking on the door and so is Jesus. He wants to save you, will you let him in? Find out what you must do to be saved here.

If you feel you have received some value from this site, donations will be gratefully accepted to help support my efforts to provide you with the truth about the end times and help us reach the world for Christ.

Partner With Us And Help reach The World For Christ


William Frederick is an end times Bible prophecy researcher who has written a must read prophecy book entitled The Coming Epiphany which is available in paperback and as an eBook on Amazon.com.

In The Rapture Theorem Mr. Frederick presents a proof showing why the Rapture will not occur until after the moon is turned to blood on a very special day, which is available in paperback and as an eBook at Amazon.

He has also cracked the hidden codes on the dollar bill that have staggering implications, which are explained in his book The Dollar Code; also available in paperback and as an eBook on Amazon.com.
Posted by William Frederick, M. Div. at 6:27 AM 16 comments: