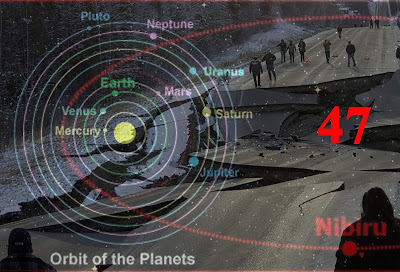 Large earthquakes have been occurring in a 47 day pattern. It has been theorized that this 47 day pattern of earthquakes, which matches the reported 47 day orbital period of Nibiru, is being caused by Nibiru’s approach. For the data that leads to this conclusion see the post: Beware of the Nibiru 47 Day Large Earthquake Cycle.

This particular 47 day pattern in December of 2019 is also part of the overall 188 day earth-sun-nibiru alignment pattern. Therefore this watch period has the potential for greater earthquakes.

Over the years the list of scientists who believe in Nibiru has grown. Here is one such scientist that can be added to the list that was featured in a post at The Big The One.

Nibiru is a comet planet, which, roughly, is seven times larger than the Earth.  She has a monstrous magnetic field.  It extends to 47 astronomical units and is at least 200 times larger than the Earth’s magnetic field.  And that all we know about her is that Nibiru is a cosmic riddle that challenges all the laws of physics.
Most likely, Nibiru is a very dense body, the surface temperature of which does not exceed 40 degrees.  It is surrounded by a thick layer of magnetic iron oxides that absorb sunlight.  Now Nibiru is located at a distance of 4 astronomical units and is only visible occasionally - when passing by massive planets whose magnetic field causes disturbances in the cloud surrounding Nibiru.

In turn, this cloud causes disturbances throughout the solar system, manifested in the form of surges in the magnetic field, volcanic activity and earthquakes.  However, around all this there is a conspiracy surrounding real data like a cloud of dark debris surrounding Nibiru itself.

Unfortunately, we do not know and cannot find out the exact statistics of the periods of the collapse of the fields, and no one will tell us the long-known date of arrival.  We see only the manipulation of the amplitudes of planetary seismic activity...

Gentlemen, while we are surrounded by a media war and data blocking, we will still encounter this arrival sooner or later.  Astronomical laws are very simple.


I already mentioned in earlier diagrams that Jupiter is now catching up with the more distant Saturn, and both of them are located approximately in the area of ​​the constellation Sagittarius.  When these two large planets line up in relation to us in one line, the Nibiru system between us should be visible even with simple binoculars.

Gentlemen, even NASA consultant and former president of the US Geological Survey, Dr. Eitan Trowbridge, warn that time is running out - the arrival is close.  Trowbridge is currently providing compelling evidence of abnormal climate change, the intensity of hurricanes and numerous earthquakes and volcanoes.

And this is a sign that Nibiru is at the door, forcing elites who know the true time of arrival to climb underground.  And only a few honest scientists challenge the elites, trying to convey information to people so that they take at least some precautionary measures.

And when might Nibiru be closest to earth? According to this report 2023-2024.

For nation shall rise against nation, and kingdom against kingdom: and there shall be famines, and pestilences, and earthquakes, in divers places. Mt 24:7

And I beheld when he had opened the sixth seal, and, lo, there was a great earthquake; and the sun became black as sackcloth of hair, and the moon became as blood;… and every mountain and island were moved out of their places. Rev 6:12, 14b

And the same hour was there a great earthquake, and the tenth part of the city fell, and in the earthquake were slain of men seven thousand: and the remnant were affrighted, and gave glory to the God of heaven. Rev 11:13

18 And there were voices, and thunders, and lightnings; and there was a great earthquake, such as was not since men were upon the earth, so mighty an earthquake, and so great.

19 And the great city was divided into three parts, and the cities of the nations fell: and great Babylon came in remembrance before God, to give unto her the cup of the wine of the fierceness of his wrath.

So as we approach and progress through the end times the earthquakes will grow in frequency and magnitude to the point where eventually every island and mountain will be gone! The data seems to be indicating that one of those large earthquakes may occur in the upcoming Nibiru earthquake watch period from 12/2/19 to 12/16/19 *(11/29/19 to 12/19/19)* We watch.

You can escape the major end times earthquakes and be saved from the wrath to come by becoming a child of God. Find out what you must do to be saved, click here.


Do you know what will happen in the end times and how to prepare for them? I wrote a book to help you. It is entitled The Coming Epiphany and will explain to you, in an easy to understand format what you need to know about the end times. The Coming Epiphany is available in paperback and as an eBook on Amazon.com. (If you cannot afford one please email me)
Note: I appreciate and want to thank all of you who have helped support this ministry by purchasing a book and or making a donation.


About the author: William Frederick; M.Div. has been preaching and teaching the Word of God for over 30 years. He has dedicated his life to serving God and helping others come to a saving knowledge of the Lord Jesus Christ and understand essential end times Bible Prophecy truths. He is the author of several books including The Coming Epiphany and The Dollar Code. His articles are originally published on The End Times Forecaster Blog. From there, his articles are published and referenced on various prophecy news related websites. If you would like to republish his articles, please feel free to do so, just please include the original link to the article. The more people that see this information the better, and we need to wake more people up while there is still time.