ALERT: Hurricane Sandy--HAARPing on a Judgment of Biblical Proportions


As of 11:00 P.M. on 10/27/12 Hurricane Sandy is a category 1 Hurricane with sustained winds at 75 mph. At present she is predicted to make landfall in Delaware or New Jersey early Tuesday morning—of course this could change. Here is a link to the NWS for the latest on Hurricane Sandy and one from the Weather Channel.


Hurricane developed into a tropical storm on 10/22/12 and became the 18th named storm of the season.  Many are saying that Hurricane Sandy could have a severe impact on the East Coast from Washington D.C to . A Category 1 might not be such a big deal in the Southern states, but on the East coast where there are many tall deciduous trees—it’s a big deal. Here is what The Capital Weather Gang had to say about this.


There is a consensus forming in weather forecast models that hurricane is unlikely to go out to sea. Instead, it more likely will merge with a strong fall cold front and transition into a powerhouse, possibly historic mid-latitude storm along the mid-Atlantic and/or Northeast coast Sunday through Wednesday. Capital Weather Gang


I am inclined to believe that Hurricane Sandy could be a storm of Biblical proportions for more than just what the weathermen are saying. For one, there seems to be some major weather modification going on as has been reported by HAARPstatus.com (Their link was added to the sidebar of this blog under “Info Links” earlier this week.) Here is what they are saying about it, followed by their latest graphic displaying their data.

We think Hurricane Sandy is being steered into the . Since this showed up over a week ago before anyone started talking about the storm, do feel we are seeing a controlled storm…

10/25: The now has a 9.1 Magnitude frequency, a highly rare event. Keep in mind this has been building in longwave form for about a week now.

Later that night: From a 9.1 this morning to a 9.5 tonight, this area is in grave danger…

10/26: Strongest readings in the history of this project have peaked. A never before seen white-shade indicates that a value higher than 10 on the 1-10 scale has been indicated.

Hmm… never heard of HAARP before? It basically puts energy into the atmosphere; the extra added energy then spawns weather changes and storms. at Cutting Edge Ministries has some excellent info on HAARP. Here is a snippet from one of his articles—I highly recommend reading the entire article.

In a nutshell, this is the nucleus of the expertise just recently acquired to control the weather. By pouring measured energy that has been focused into certain parts of the ionosphere, scientists can create all kinds of storms like hurricanes, thunderstorms, floods, tornadoes, and drought…A TERRIFYING LOOK AT THE CONTROL OF WEATHER WARFARE -- A LOOK AT HAARP

So the HAARP data, though some may consider it to be questionable, adds to my concern about Hurricane Sandy, and remember “angels don’t play this HAARP.” Note: If HAARP modification is taking place I am making no implications as to who would be responsible for this. Update: There are many ionospheric heaters throughout the world. Here is the link to a video showing them; https://www.youtube.com/watch?v=ZrjLl4iyXcg&feature=player_embedded

Another thing that concerns me is the meaning of the name . First can be either masculine or feminine; this storm is the feminine form, for storm names now switch from male to female every storm. The storm before Sandy was Rafael, which is masculine, so Sandy being the next storm is feminine. Here is what behindthename.com had to say about the feminine form of .

Alexandra: Feminine form of Alexandra; In Greek mythology this was a Mycenaean epithet of the goddess Hera, and an alternate name of Cassandra. http://www.behindthename.com/name/alexandra

Hera: Uncertain meaning, possibly from either Greek ‘ηρως (heros) "hero, warrior"; ‘ωρα (hora) "period of time"; or ‘αιρεω (haireo) "to be chosen". In Greek mythology Hera was the queen of the gods, the sister and wife of Zeus. She presided over marriage and childbirth. http://www.behindthename.com/name/hera

So to me the name boils down to being associated with Hera the goddess of marriage and childbirth. That also adds to my concern—America, and especially the East coast states, have been attacking traditional marriage and have also been forefront in stopping unwanted childbirths. These are abominations to God, which He will bring retribution upon with severe judgment. What states allow same-sex civil unions? , Delaware, , New Jersey, and Rhode Island. What states allow same-sex marriage? Massachusetts, Connecticut, , Vermont, New Hampshire, New York and the District of Columbia. Hmm…Where is this storm headed?

At the time of this writing it is predicted to make landfall in the Delaware/New Jersey area, which as you know is near many of the other states on the list. Hmm… Since I mentioned Delaware, how are they on abortion?

For every five children born in Delaware, two are aborted. From 2000-2005, the last years for which we have data, Delaware had an average of 11,196 live births and 4,559 abortions. http://www.aroseandaprayer.org/index.php/faq

If you read the rest of the information at the link you will see that Delaware has one of the most liberal abortion policies in the country, and does many out of state abortions because no parental consent is required—unless you get your ears pierced. BTW, not to pick on Delaware, but many other Mid-Atlantic States also have liberal abortion laws.

There are also a few number meanings that concern me. It is the 18th named storm.

666: Is "the number of a name" (Rev 13:17,18). The gematria of the name of Antichrist is the number 666. But this number has, we believe, a far deeper reference to and connection with the secret mysteries of the ancient religions, which will be again manifested in connection with the last great apostasy…666 was the secret symbol of the ancient pagan mysteries connected with the worship of the Devil. http://www.biblebelievers.org.au/number17.htm

9: The number nine is a most remarkable number in many respects. It is held in great reverence by all who study the occult sciences; and in mathematical science it possesses properties and powers which are found in no other number.

In Scripture it is the number of finality or judgment. Genesis 19, recording the judgment of , is marked by multiples of nine. http://www.biblebelievers.org.au/number13.htm

Here is something else to keep in mind; in the past strong judgments have come against countries including the United States when they have taken actions against Israel—like Hurricane Katrina and the Fukushima disaster. (See the posts entitled; OurBack Against Fukushima and 3 Lines toIsrael; One for Life, Two for Death ) Has the taken any actions against lately? Well it just so happens that the day the storm formed—10/22/12—Former President Jimmy Carter was in elaborating on the Israel/Palestinian issue.

— Former U.S. President Jimmy Carter said Monday during a visit to that the prospect of an Israel-Palestinian peace accord is "vanishing," blaming Israeli settlement of the .
Carter, a longtime critic of Israeli policies, called the current situation "catastrophic" and blamed for the growing isolation of east from the . He said a Palestinian state has become "unviable."

"We've reached a crisis stage," said Carter, 88. "The two-state solution is the only realistic path to peace and security for and the Palestinians."…

Carter and the delegation also expressed concern about the ongoing divisions between the main Palestinian parties, Fatah and Hamas, and vowed support for a Palestinian observer state status bid at the United Nations General Assembly in November.
http://www.huffingtonpost.com/2012/10/22/jimmy-carter-says-middle-east-peace_n_2001826.html

And when and where is that Palestinian bid for statehood supposed to occur? You know—at the U.N. in New York City, possibly on 11/11/12—Hmm…Is Hurricane Sandy supposed to effect NYC? Here is more about the vote;

The UN Security Council could vote as early as November 11 on whether to grant the Palestinians full UN membership as a state, according to a Western diplomat.

Palestinian President Mahmoud Abbas holds a copy of the letter requesting statehood at the UN General Assembly last month  "There will be further discussions on 11 of November with possibly a vote (that would mark) the end of the consideration process," the diplomat said.
http://www.telegraph.co.uk/news/worldnews/middleeast/palestinianauthority/8836990/UN-could-vote-on-Palestinian-bid-on-November-11.html

Thus in my mind, the weather predictions, the HAARP data, the meaning of the name and numbers, the “sins” of the Mid Atlantic, an anti-Israel discourse by a former President, and the upcoming Palestinian bid for statehood at the U.N. in NYC all point to the strong possibility that Hurricane Sandy may develop into a “catastrophic” judgment of Biblical proportions.

I asked God to give a scripture passage for this storm. I randomly opened my Bible to Ezekiel 7, a passage written to Israel, but remember prophecies can have more than one fulfillment. Here is what stood out to me.

Will this storm bring a catastrophic judgment upon the East Coast of America? And if so, will it be a judgment from God against our sins regarding marriage, childbirth, and our treatment of Israel? Or will God have mercy on us and turn it out to sea? I do not know what will transpire regarding this storm, but if God directed me to that passage, which I believe, then it would indicate that judgment is coming, and it will not be turned away. Of course you can believe as you choose.

Where might this judgment hit the hardest? The passage above mentions the four corners of the land, which may indicate a more Northern track--NYC and above, or it may indicate anywhere in the Northern quadrant of the country, which would be from about D.C. North. BTW; the latest analysis from HAARPstatus.com is saying it may track in a more Northern direction. Time will tell.

Regardless of whether this storm will eventually hit us or not, this storm concerns me, and I am going to start prepping for it—just in case—because the forecast at present has it heading right for me. A storm of this proportion could cause major damage, and result in power outages for weeks. Your prayers appreciated. Hmm… I wonder if it could cause the election to be suspended?

Update 10/28: Not sure what to make of this but in 1997 the American Radio Relay League (ARRL) conducted an Amateur Radio emergency preparedness training exercise, Simulated Emergency Test (SET).  The drill was patterned after the devastating Hurricane of 1938. Guess what the fictitcious Hurricane in the drill was named? HURRICANE SANDY. 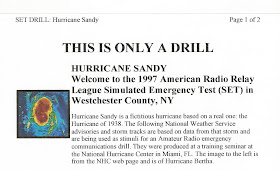 Here is some info from Wikipedia about the 1938 Hurricane, there is more at the link.

The New England Hurricane of 1938 (or Great New England Hurricane, Yankee Clipper, Long Island Express, or simply the Great Hurricane) was the first major hurricane to strike New England since 1869....The hurricane was estimated to have killed between 682 and 800 people, damaged or destroyed over 57,000 homes, and caused property losses estimated at US$306 million ($4.7 Billion in 2012). Even as late as 1951, damaged trees and buildings were still seen in the affected areas. It remains the most powerful, costliest and deadliest hurricane in recent New England history, eclipsed in landfall intensity perhaps only by the Great Colonial Hurricane of 1635.

Update 10/29: Hurricane Sandy is strengthening and is suppose to reach 90 mph before landfall. In the forecast track above the inland H over Delaware is right over my house--I do not know how much longer I will have Internet. A reader alerted me to the fact that a satellite picture of Hurricane Sandy looks like a fetus or rather an unborn child. 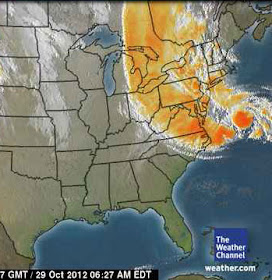 Another reader alerted me to the fact that the storm has veered around the red Republican states and is heading for the blue Democratic states. Keep in mind that most Democrats are pro abortion and most Republicans are against abortion. (Note: I am registered Independent, I vote for the most biblically conservative person. In the last 2 Presidential elections I voted for the Constitution party candidate.)

I have added a second post to this series entitled; Hurricane Sandy; Only the Beginning, More Judgments Coming
﻿