WW3; Has the Sign Occurred and Has it Begun? Updated 8/25 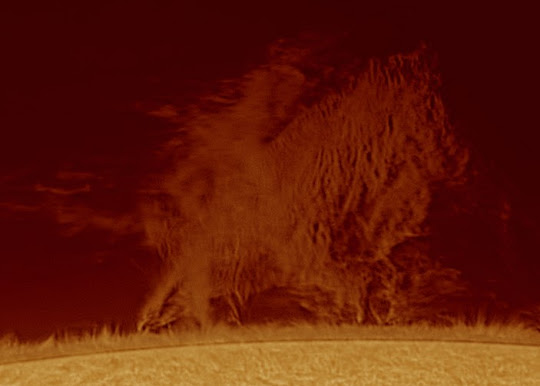 On 8/16/21 the above picture was captured. Looks like the rider on the red horse to me. Could this be a sign from God warning us that the red horse is about to ride? See the image in high definition here.

Remember many, including myself, believe Seal 1—the white horse whose rider was given a crown (corona)—began riding in 2019 and was accompanied by a sign in the heavens.

So is this red horse sun image a sign form God, is the red horse getting ready to ride? Can’t tell you for sure but look what popped up in the news today.

Is Biden Working with the CHICOMS to Secure Release of 15,000 American Contractors? Or, Are We Witnessing the Beginning of World War III?

…Between 11pm and 1am (PST), on August 19/20, I began to receive both frantic and informative calls that a major deployment of troops was taking place. Some I can talk about and with some of the revelations I have been sworn to secrecy. Here is what I know.

All across the nation, American forces are being mobilized. Here is what have learned in the 10-11 hours…

IF I HAD TO MAKE A CHOICE, TODAY, BASED ON WHAT I KNOW... THIS IS WORLD WAR III, THERE WILL BE NO RESCUE OF AMERICAN CONTRACTORS. SUBMARINES FROM THE BASE AT BREMERTON WOULD NOT BE DEPLOYED TO AFGHANISTAN. AND WE HAVE PROVEN TRAITORS IN CHARGE OF OUR ADMINISTRATION, BUT THEY NOT BE IN FULL CHARGE OF THE MILITARY!

So are we at the point of WW3, is the red horse ready to ride? Now consider this piece of data—a dream given to Cindy by the Sea at Heaven Bound.

The other night I had two short but interesting dreams that I would like to share here as I think they could be pertinent in the next few days. I’ll share the second one first.

In this dream, I was with a small gathering of people. It seemed to be a restaurant with outdoor seating. It was also at night. Part of the group consisted of Chasidic Jews. I knew this by the distinctive clothing that they wear. Suddenly, in the night sky there appeared these small but distinct words.

If you remember I have been telling people for a while that I believe it is highly possible that Seal 1 has been opened and that the occurrence of Seal 2—WW3—is next and it would be the definitive confirmation that we are in the midst of the Seals.

Elul 11; from what is being reported above, do we know, has WW3 begun, is this the definitive confirmation that we are in the midst of the Seals of the Apocalypse of Revelation?

Time will tell but remember; “Elul 11, you will know”

You see the rapture occurs as the first event during a time period known as the Day of the Lord.

1 But of the times and the seasons, brethren, ye have no need that I write unto you.

2 For yourselves know perfectly that the day of the Lord so cometh as a thief in the night. 1 Thes 5

And the Day of the Lord occurs after the sun is darkened and the moon is turned to blood.

20 The sun shall be turned into darkness, and the moon into blood, before the great and notable day of the Lord come: Acts 2

The sun is darkened and the moon is turned to blood after the sixth seal is opened, therefore the Day of the Lord and the rapture occurs after Seal 6 is opened.

12 And I beheld when he had opened the sixth seal, and, lo, there was a great earthquake; and the sun became black as sackcloth of hair, and the moon became as blood; Rev 6

And that is why they see Jesus in the sky—He came to the clouds and the rapture just happened.

16 And said to the mountains and rocks, Fall on us, and hide us from the face of him that sitteth on the throne, and from the wrath of the Lamb: Rev 6.

So has the WW3 sign occurred, and further as of Elul 11 do we know that WW3 has begun and that we are definitely in the last 7 years in the midst of the Seals—the 4 horses of the Apocalypse? As always, time will tell. BTW: the jab may be the setup for Seal 4.

Just ran across this piece of info.

...Fri. 27 Aug: The Storm Begins Sat. 11 Sept: The Storm Ends POSSIBLE STORM EVENTS: Catastrophic events were about to happen, perhaps as early as this Fri. 27 Aug. and ending 17 days later on 9/11.

Even more important, we all needed to prepare with at least three weeks of and goods storage for a shortage that appeared to be set to begin on that same Fri. 27 Aug The Storm: From all indications we were soon to experience a fake Nuclear Standoff between the US and Russia complicated by the Chinese Communist Party, Iran and Israel’s hacking of nuclear reactors worldwide.

These would be considered Biblical Events with fake Nukes and Cyber Attacks and where it appeared to be the beginning of World War III. In reality such would give the Alliance an opportunity to activate Militaries worldwide and bring in a form of Martial Law to take down the Cabal Illuminati in the largest global Military Operation in history...

The Storm Starts Friday August 27 and Ends 17 Days Later On September 11 2021 | Beyond Science | Before It's News (beforeitsnews.com)